Showing posts from January, 2012
Show all

deLiberation - the future of journalism

Sunday, January 29, 2012 at 1:17PMGilad Atzmon
Greetings citizens of the World,
This is message regarding our online news website deLiberation, only a 3 weeks old but growing fast. deLiberation are thinkers, writers, artists and activists, each committed to freedom of thought and to telling the stories that the mainstream media is there to conceal. At deLiberation we hope for a better future – a Western ‘spring’. Unlike other journals committed to power, hegemony and mammon, deLIBERATION is committed to Truth,Justice &Peace. Come visit us at deLiberation. If you would like to help us, you can by putting in a link from your website/facebook/blog to deLiberation, help us spread the word, :)) ... of TJP, Truth - Justice - Peace. deLiberation :- the future of journalism Follow us on Twitter Higlights this week on deLiberation Glad not to be ….. in the PSC Dr. Elias Akleh is a Palestinian. In 1948 and again in 1967 his family were displaced, and like millions of other Palestinians, he now fin…
Post a Comment
Read more


made in Syria !!
( even under the " dictatorship " ) If a country has already an atom bomb , it should not complain about Iran´s .
If a country has not even a parliament
nor any elected-leaders (or head of state) it should not complain about Syria´s elected-parliament.
If a country has introduced and practised terrorism into Palestine it should not complain that (some) Palestinians also use it now, as self-defence.
If a country wants to "save the Jews"
(from any probable anything ) it must take them back to where they came from
or take them into its own .
If any country wants any Peace, it must start by recalling all its soldiers back to within its own borders.
If any country wants to put me in a prison
,for what I write or what I say,
it must have its prisons
with ,
Chinese cooks and Swiss-hygiene
Syrian sweet + pastry shop
and
Swedish-prison´s-laws.

Omar Barghouti of the Palestinian chapter of the Boycott, Divestment and Sanctions (BDS) campaign against Israel slammed Arab involvement at the conference as "an act of complicity in the promotion of Israeli occupation and apartheid."

The conference, which is being held for the 12th year, aims at enhancing Israel's nationa…
Post a Comment
Read more

Fire Burn and Cauldron Bubble: Eye of Newt and the ‘Invented’ Palestinians

“Double, double toil and trouble;
Fire burn, and cauldron bubble”
“Perhaps unsurprisingly, the former speaker of the U.S. House of Representatives seems to have a history of deserting the women in his life precisely at moments they find themselves battling debilitating illnesses. Gingrich divorced his first wife, Jackie, as she was being treated for cancer, and then said adios to his second wife, Marianne, after she had been diagnosed with multiple sclerosis. The 68-year-old is now on his third marriage…”
By Richard Edmondson
Normally I don’t write a whole lot on presidential politics for the simple reason that it’s such a Zionist-controlled cesspool it often seems hardly worth commenting on. Moreover, it has always struck me as intellectually dishonest to single out this or that Republican—as a lot of leftwing bloggers do—for criticism, when the Democrats, including the one presently in the White House, are just as bad if not worse. Even so, here are a few items I couldn’t let pass…
Post a Comment
Read more

By Abdul Nasser Fakih
"The Herzliya Conference", hosted by "the Interdisciplinary Center" at Herzliya in occupied Palestine; also one of the "Israeli" strategic security conferences and one aiming at assisting the enemy's entity to determine the present security risks and the means to face them, is being held on the 30th of January through the 2nd of February in occupied Palestine, where a big number of economic, military, and political Zionist leaders are participating, as well as international, influential figures including European presidents and prime ministers and senior officers of international institutions and organizations. Yet, it is significant that some Arabs from Qatar, Jordan, and the Palestinian Authority (PA) are taking part in "the Herzliya Conference" and in normalization, therefore. This complies with a previous declaration by "the Gulf Cooperation Council (GCC)" concerning "an Iranian threat"…
Post a Comment
Read more

Is Israel on the road to self-destruction? 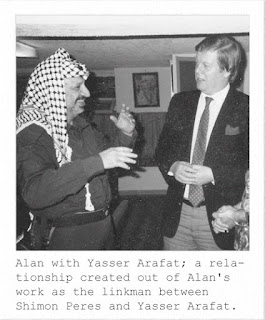 Again and again Mr. Alan Hart is repeating the song (Blackmail): His friend "Mother Israel" told him: "In a doomsday situation," she said, "Israel would be prepared to take the region down with it.”
Is Israel on the road to self-destruction? Alan asked, though he knows the answer.
Israel is in a doomsday situastion, and Alan's "nightmare" may come true.
To prevent Israel from destroying itself and taking the world with it, he involved him self in the what he called "Peace conspiracy" and served as a linkman between Arafat "Father Palestine" and Perez. Oslo is the bastard child of his peace conspiracy. After two decades Alan is still woried

On september, 2010, Mr. hart called the Saudi King to follow the advise of Thomas L. Friedman: "King Abdullah should invite Mr. Netanyahu to Riyadh and present it to him personally.”

He called Fatah-Hamas to declare in the most explicitterms, "we are a pragmatic people andwe here…
Post a Comment
Read more

The Bible Unearthed (The Documentary)

Two days ago I got the following article from Dr. Ashraf Ezzat,

The Bible Unearthed (The Documentary)

Dr. Ashraf looks so excited with  Prof. Israel Finkelstein & Neil Silberman, asserting that Abraham, Isaac and Jacob never existed,
"Dozens of digs in Egypt, Israel, Jordan and Lebanon have changed experts’ understanding of ancient Israel and its neighbours- as well as their vision of the Bible’s greatest tales" In other words instead of digging somewhere else, the A masterful archaeological and biblical investigation, lead atheist the digs as a real evidence that "Abraham, Isaac and Jacob never existed, that David and Solomon were not great kings but obscure chieftains and that the Exodus never happened" wrote Heather Campbell"I think the genius and power lie with the scientists and scholars who have painstakingly put together what really happened, based on real evidence, even though it goes against what they have been told is holy and authoritative. This …
Post a Comment
Read more
More posts