Showing posts from May, 2011
Show all

President al-Assad Grants General Amnesty for Crimes Committed before May 31, 2011

The amnesty includes all members of Muslim Brotherhood and other detainees belonging to political movements.

The amnesty also pardons half penalties for felonies if there was no personal claim.

Granting general amnesty for all crimes committed before May 31, 2011 according to the following:

Sayyed Nasrallah’s Full Speech on May 25 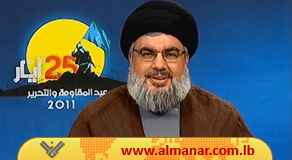 The speech delivered by Hezbollah Secretary General Sayyed Hassan Nasrallah on the Resistance and Liberation Day on May 25th, 2011.

I take refuge in Allah from the stoned devil. In the Name of Allah, The Compassionate, The Most Merciful. Praise be to Allah, The Lord of the world.

Peace be on the Seal of prophets, our Master and Prophet Abi Al Qassem Mohammad Bin Abdullah, his chaste and pure Household, chosen companions, all prophets, messengers, martyrs and fighters in the path of Allah until Judgment Day.


Brothers and sisters! Peace be upon you all and Allah's mercy and blessing.

I welcome you on your holiday and I would like that you consider your presence under the sun as a kind of assistance and equality with the Resistance fighters who have spent 30 days under the sun.

Dear Ban Ki-Moon, Your Concern for our Safety is Touching

Via MCS - 30. May, 2011
ED NOTE: With the forthcoming possibility of the UN possibly declaring a State of Palestine with defined borders, it is important for Israel to do what they can now to “legitimize” their own existence, and to cut or minimize their losses before anyone sits down with a chart and starts drawing lines. What the UN decides or declares in chamber or on the floor, is of little relevance, compared to what happens when a small committee of people sit down and actually start lines on charts, for that is the knife which carves the goose, or slices the ham!

There is obvious panic in Tel Aviv, and they have the hit men making calls world-wide, dropping off verbal bullets on importan…
Post a Comment
Read more 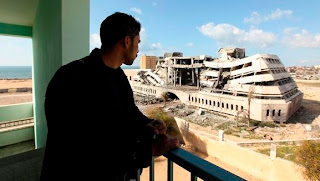 The ruins of Lifta are the final remains of the Palestinian hamlets that fringed Jerusalem until 1948. Now plans to bulldoze them are causing outrage﻿﻿﻿﻿﻿﻿A Palestinian looks at an abandoned security site after it was
damaged by Israeli air strikes in the northern Gaza Strip Harriet Sherwood
guardian.co.uk, Sunday 29 May 2011 23.17 BST

Yacoub Odeh shows film-maker Mat Heywood around his deserted home village, now under threat from Israeli plans to build a luxury resort Link to this video In the soft golden light of a late spring evening, as yellow flowers are beginning to bloom on giant cacti, Yacoub Odeh climbs up through knee-high grass to the ruin that was his childhood home. For a man in his eighth decade, he issurprisingly nimble as he navigates ancient stones that litter the ground. But behind his light step is the weight of painful memories of a lost youth and a fading history. "Here is my house,"he says, sitting on the remains of a stone wall in whose crevices wild flowe…
Post a Comment
Read more
More posts